In the offshore industry, increasingly technology is being protected with patents, as can be seen in the below image. This image is showing the published patent applications relating to fixed offshore platforms (IPC class E02B17). In the last five years, patent filing numbers on fixed offshore platforms have tripled, from around 200 to around 600 patents per year: 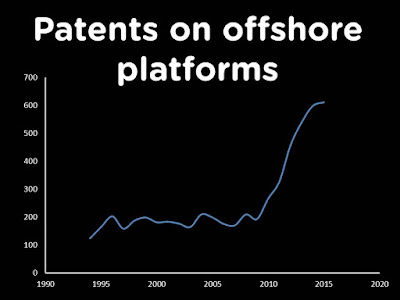 The increased activity in patent application has not yet lead to increased patent litigation. Patent disputes within the offshore operating industry still are rare. Thus in most countries, the extend of patent protection and its enforcing potential has not been trialed. In those countries where some case law has developed, diverging visions on the extend of enforcement have ensued, leading to differences in geographical protection of inventions.

Honestly, it was a client who came with the question, and I had no real insight in where a patent could be enforced offshore and where not. Luckily, two law students, while obtaining their bachelors degree, helped me a lot in sorting out this rather complex matter [1,2].

The main question in their search was: What is the offshore extend of patent protection in various jurisdictions around the globe? 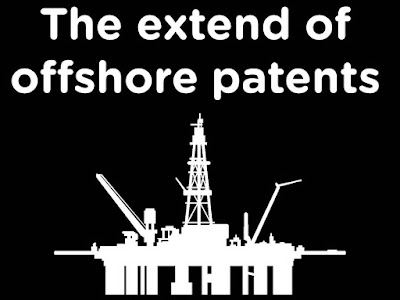 In order to fully grasp the legal situation of patents offshore, first of all we have to dig into the United Nations Conventions on the Law of the Sea, known by the UNCLOS acronym. The latest of these conventions is the 1982 version UNCLOS. This convention divides the sea into basically five zones:

Graphically the UNCLOS zones can be represented by the following image: 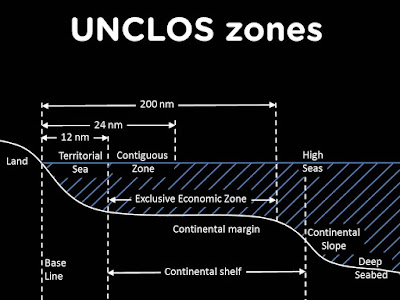 Although the UNCLOS made numerous sea activity and legal situations clear, the enforcement of patents offshore have not been clearly worked out. This has led to the situation, that it still greatly depends on the national law and national case law, how these various zones are interpreted in patent enforcement. Although it could be argued  that the exclusive economic zone would also be valid for the laws on patents, this is anything but the case. Below I have listed some countries relevant for offshore activity, of which we could find information on this topic. The list is far from complete, and seen the divergent national approaches, there is a need for harmonization.

In the UK, for instance, patents can be enforced both in the territorial sea and the entire exclusive economic zone, even extending to the continental shelf as is indicated in patent dispute between Rockwater and Coflexip. So offshore infringement can be halted up to the outer edge of the continental shelf [2,3,7].

In the Netherlands, enforcement outside the territorial zone, in the exclusive economic zone is likely restricted to methods for exploration and exploitation of natural resources, as is suggested in the patent dispute Prodect versus Smulders [2,4]. The word methods is put in italics, because it appears that patent protection on objects or products as such is not deemed possible in the exclusive economic zone.

The USA have not ratified the 1982 UNCLOS. In a relative recent decision, the US federal court decided, in referral to a 1983 Presidential Proclamation on territorial boundaries, that the Exclusive Economic Zone lies beyond the USA territory and beyond the territorial sea. Patent enforcement therefor is only possible up to 12 miles from the baseline  [1,5,7].

In a relative recent South African Court decision, the court noted the controlling Maritime Zones Act, the object of which is to bring South African law in line with the Convention, provided that “any law in force in [South Africa] applied to ‘installations,’ such as pipelines, within the Exclusive Economic Zone.” Therefor in South Africa, patent enforcement is possible up to 200 nautical miles from the coastal baseline [7,8].

In German patent law, no reference is made to any offshore territorial effect on patent enforcement. Germany is however signatory state of the UNCLOS. No case law could be found, from which any indication of the offshore patent protection could be deduced. In German legal literature, the general opinion is that specific laws do extend offshore, if and only if there exists an extension clause (Erstreckungsklausel) in that specific law. Since there is none in the German patent law, this would mean that the patent protection and enforcement would stop at the 12 nautical mile limit [9].

In Norwegian patent law, much like in Germany, no reference is made to offshore territorial effects on patent enforcement. However from the Norwegian petroleum act, it can be deduced, that patent law is applicable to devices that engage petroleum activities on the Norwegian continental shelf. However this is an implicit regulation, and does not clarify patents on other technical fields, such as tidal energy, wind energy and transportation of energy [10].

Canada did ratify the UNCLOS. In the Canadian Patent Act however, no provisions are given that expressly extend the enforceability of patents offshore. Neither does this act have provisions limiting the enforceability of patents to a “territory or possession” of Canada. Since there are no limitations to any of the nautical zones, there is a sound basis for concluding that Canadian patents would extend to resource exploration or exploitation installations and fixtures located within Canada’s Exclusive economical zone or on the Canadian continental shelf.

Thus, it is likely that Canadian patents would be deemed as being enforceable against infringing entities that are active in the field of offshore resource exploration (or exploitation) and performing the infringing actions within Canada’s exclusive economical zone or on the Canadian continental shelf.

However, it is possible that a Court could interpret the statutes more narrowly and deem the Patent Act inapplicable to such offshore facilities, since there is no Canadian statutory or case authority directly on point[1].

The nautical stretch of the enforcement of patents is not implemented in the Nigerian patent law. Nigeria however did ratify the UNCLOS. Most likely in an Nigerian trial on offshore patent infringement, the courts will follow the UK practice. This is however not yet proven [1].

In the historic versions of EU-regulations relating to the community patent, explicit reference was made to the UNCLOS (and to the UNCLOS continental shelf regulation). In these issues, a neat harmonization in line with the UNCLOS, i.e. that enforcement would be integrally possible in the exclusive economic zone, or even on the continental shelf had been proposed [11, 12, 13]. Sadly none of these versions had succeeded to become in force.

The now soon to become in force regulations on the Unified Patent Court and the Unitary Patent are silent about the nautical extent of territories [14, 15, 16]. Somehow in the excitement over this long awaited break through, the nautical territories have been forgotten.

There is however a relative recent EU Court decision on the extend of European regulations offshore. Although this decision concerns an employment relationship and a social security dispute, the conclusions in the opinion of  Advocate General Cruz Villalón refer to the functional equivalent of the continental shelf and the State territory [17]. In the Court decision, following this opinion, in item 37, it has been established that EU law is applicable to the continental shelf adjacent to a Member State [18].

So this is very promising:
1. The Unitary Patent and Unified Patent Court are EU-law.
2. The Salemink versus UWV EU-Court decision dictates that EU-law is applicable to the continental shelf.

With the Unitary patent system coming in force, as a surprise gift, an automatic harmonization and broad extension of offshore patent protection can be welcomed. The system that is currently in force under the European Patent Convention (EPC), is not EU-law and territorial issues, as dictated by the EPC are solely underlying national jurisdiction.

Those applying for any offshore related patents, I can strongly advice to opt in the unitary patent system as soon as it becomes available. This is in order to avoid eventual narrow, national territory judgments by national courts on infringement disputes offshore, such as the Prodect versus Smulders case illustrates [4]. 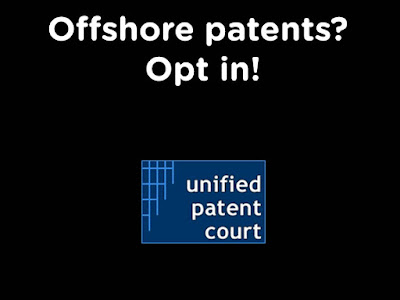 All the above does not apply to ships passing through. This ship exception is dictated by Article 5ter(i) the Paris Convention, in its latest version:

‘In any country of the Union the following shall not be considered as infringements of the rights of a patentee: (i) the use on board vessels of other countries of the Union of devices forming the subject of his patent in the body of the vessel, in the machinery, tackle, gear and other accessories, when such vessels temporarily or accidentally enter the waters of the said country, provided that such devices are used there exclusively for the needs of the vessel.

Flag of the ship

In UNCLOS, the state shall effectively exercise its jurisdiction and control in administrative, technical and social matters over ships flying its flag. Possibly patent infringement on passing through ships and on ships in the high seas can still be trialed in the flag state, provided there is patent protection in force in the flag state in question.

The extend of offshore patents in various nations remains a yet to be harmonized, rather complex topic. Obtaining information from well informed local patent specialists is key to understanding the national peculiarities of offshore patents.


I wish you all happy inventing,
Hendrik de Lange
http://www.octrooifabriek.nl

[14] Regulation (EU) No 1257/2012 of the European Parliament and of the Council, implementing enhanced cooperation in the area of the creation of unitary patent protection.
http://eur-lex.europa.eu/LexUriServ/LexUriServ.do?uri=OJ:L:2012:361:0001:0008:EN:PDF

[16] 17th draft of the Rules of Procedure of the Unified Patent Court
http://www.unified-patent-court.org/images/documents/UPC_Rules_of_Procedure_17th_Draft.pdf